I honestly think Wafcol has changed and saved his life. 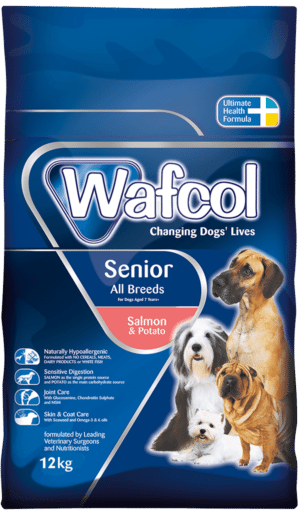 Harvey, a 13 year old Bull Terrier x Border Collie, was diagnosed with numerous food and environmental allergies about 6 years ago, following the surgical removal of several lumps and problems which included his skin being red and inflamed, itching and licking at his paws and a very runny bottom most of the time. It was discovered that Harvey was hyper sensitive and allergic to red meat, eggs & dairy, and numerous plants and grasses too.

This required an immediate change of diet; Wafcol was recommended by my vet as it was hypo-allergenic and there was also a ‘senior’ version which would help give Harvey all the other essential oils and good things he needed as he got older. He has loved it from the first day he has had it – and I now wouldn’t feed anything else; I honestly think Wafcol has changed and saved his life. My 11 year old Springer Spaniel, who was rescued 4 years ago, also came with unbelievable runny stools and grumbling tummy – and he went straight on to Wafcol too. Two days later, the improvement was amazing – and he has stayed on Wafcol Senior with Harvey ever since. I don’t rave about products very often – but Wafcol really is the best food I have ever fed, and would recommend to anyone – from puppies to golden oldies and everything in between!

Submit Your Own Success Story